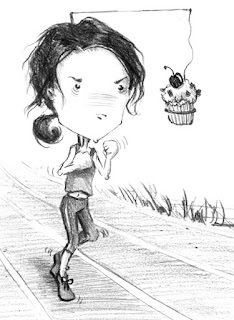 As I promissed a few days ago (or maybe as I planned a few days ago ), here's the next part of the article about making plans and executing them. Acoording to my assumptions there are three factors for succeding  in realizing a plan:
-a logical, specific and feasible plan
-motivation
-luck (or at least lack of bad luck)

Here I'll focus on the second factor - motivation. My main motivation is fear (I know, most psychologists would conclude that it's a bad motivator). It's fear of not taking full advantage of my opportunities, fear of  mediocrity, misery and wasting of the only life I have. Believe me, it's a very strong inner motivator (however I'm still quite far away from achieving my all goals). And there are also many external motivators. Here are some of them!

MOTIVATORS HELPING IN EXECUTING YOUR PLANS:

1. Writing down plans in a notebook. It should make you feel obliged to fulfill them, right? From that point they are not elusive, unspoken thoughts, but clear and real plans.

2. Telling your friends and family about your plans (in brief, it's a hardcore version of point 1.). It may seem to be a  very effective motivator, but it's also risky, if you won't choose the right listener. Honestly, I never do that. I've got a  very personal attitude to my plans and I don't need any additional incentives in the form of a possible shame in front of  acquaintances. Furthermore many people (including my relatives and mates) tend to have an ambivalent attitude to everything exceeding mediocrity and everyday life. Thus, their reaction can be more demotivating than uplifting.

3. Writing about your not personal plans online. This is a wonderful motivator! It would be kind of unprofessional not to fulfill what has been announced in front of at least hundreds of people.  Usually I get tremendous support from people , I haven't met in person, which really fills me with energy to work.


In the next few entries I'll focus on presenting my latest illustrations, so there won't be so much to read. And that's a plan!

How to Make Plans and Stick to Them? 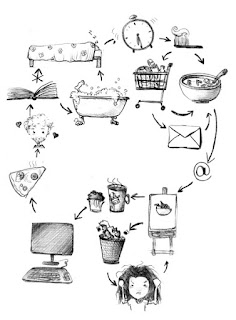 Are freelance jobs a good fit for scatterbrained, unorganized people, who have problems with motivating themselves to get out of bed before noon? For some strange reason I was thinking so...  and I was wrong. I'm afraid, that for those people the perfect  "occupation" is being a proud heir of a fortune. Whereas those, who want to be masters of their time but still have to earn a living, need to be able to plan and organize.

Presumably there are  very few people with a natural talent for being well-organized. Mere mortals have to prepare an action plan to evaluate, segregate and arrange individual steps for achieving their goals.

Planning system doesn't have to be very sophisticated. I've never been good at making multi-color notes, drawing schedules on a paper bigger than me  or hanging a whole bunch of notes on a corkboard.  My method is quite simple and not very visionary. But it has one strong point - it works!*

It's based on a system of long term goals and short term goals and it can be created in a standard planner (even if my long-term goals refer to the much more distant future). At the end of such planner there is usually a place for some notes, which I use for setting long-term goals. And that's THE FIRST STEP. Long term goals can be very general, like: "a stable source of income as a freelance illustrator" or "a healthier lifestyle". At first it may look like a wish list, letters to Santa Claus or a storytelling, but that's fine at this stage.

THE SECOND STEP is a closer defining of long-term goals and an attempt to transfer them into a sequence of short-term goals. It should help you to understand what your long term goals actually mean to you, for example does "a healthier lifestyle" means a better diet, more exercises, less stress or moving to a quieter place? Short-term goals should follow long-term goals and lead to achieving them. Let's say that to have "a stable source of income" you plan to establish cooperation with a few book publishers. Simplifying for the blog's purposes, the plan could look like this:

3 Preparing your own branding.

These actions can be loosely written on a separate page dedicated to a specific  month.

THE THIRD STEP involves dividing issues from the previous step into specific actions, estimating the time required to perform them and assigning them to specific days (and even hours) in a planner.

Regarding 2: Estimated time-a week (assuming, that you have other daily responsibilities).


That's how a vague idea of "having a stable income source" starts to take a clearer shape in a realistic time frame.

1. It's easier to forget about writing an email than about drawing something, so I mark  all the tasks related with contacting people with "!".

2. After completing a task I mark it with "+" . If the task hasn't been completed, then... well, it shall be crossed out and moved to another day. It may seem that I have quite long delays, but I don't because:

3. I make plans for only 5 days/week. However, if some of my tasks haven't been completed on initially planned time, I tend to work also on weekends. It could lead to workaholism, unless:


5. It's a good practice to have your planner/notebook with you. All the ideas for drawings can be written down in it as soon as they appear. From time to time (once every 3-4 months) I browse through these ideas to check, if they still seem so splendid as when I was writing them down.

Formulating a plan is one thing. The other thing is motivation to execute it. It would be an extremely long article, so MOTIVATORS HELIPING IN EXECUTING YOUR PLANS will be described later on this week.

Honestly, I've never made them before. I'm always feeling  downcast and burnt out at the end of the year and even more depressed at the beginning of the year.  At that time my future appears as a  sequence of disasters and failures, with no possibility of improving, but with many opportunities for deterioration. The advantage of this situation is that the worse my mood is, the better my works are (Hipp Hipp Hurray!) - strange but true.

After this short, personal digression, we can go straight to the point - my resolutions for this year:

2. to make some character designs* (easy part)
*side note: these designs should be outstanding... or at least interesting (aha, here's the catch)

5. to start a video blog about drawing/painting (great, I was afraid that I would have to sing or dance)

What a short blog entry! In the next article I'll describe how I make long-term and short-term plans and how I actually keep them :)
Autor: Evi o 14:15 No comments: