Time for the second portion of Steampunk cards created in an old school, traditional way (ink and watercolors). Today I'll focus on the red suits - hearts and diamonds.


"Hearts" were meant to represent the cultural and elegant side of Steampunk. Top hats, victorian fans and lace should be a good fit here. Ladies and Gentlemen, please welcome the Queen and the King of Hearts: 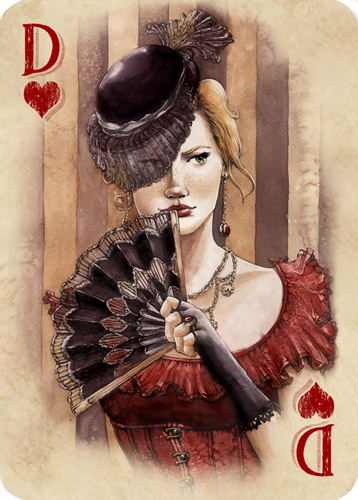 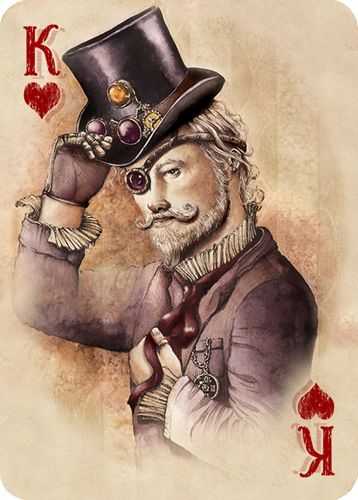 Now we are leaving salons to meet the darker side of Victorian era - decadence and pests especially decimating industrial areas. My favorite card - Jack of Diamonds as known as a "Pest Doctor" (in a steampunk style): 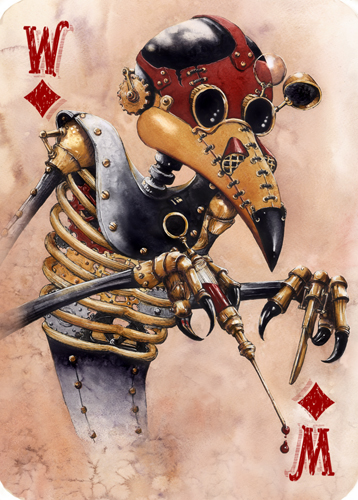 And which vehicle could represent this group better than a hearse? A steampunk hearse of course :D 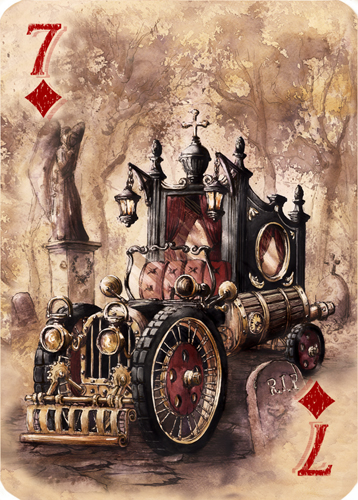 I hope that these few illustrations managed to arouse your curiosity and that you'll be willing to see steampunk pirates and inventors in the next blog post!

The deck was created for a Polish playing card company "Trefl".
Autor: Evi o 13:28 No comments:

“Once you’ve accepted your flaws, no one can use them against you.”
George R. R. Martin, "A Game of Thrones"

For some strange and unexplained reason I'm working mostly on graphic designs and environment/architectural designs, which means that I'm using only pens/pencils and graphic tablet on daily basis.
As the time went by I began to suspect, that I'm going to forget how to make watercolor illustrations until one day...
a proposal from one of the leading Polish card manufacturer ("Trefl") came.
The offer concerned making set of cards in a Steampunk style. Handmade, watercolor technique, victorian aesthetics, steampunk subjects - PERFECT!
Some of my previously done artworks were also welcome to be part of the deck (ie "Train", "Steampunk Landscape").


Working process started with thinking (what a surprise!).

CONCLUSION 1 - Jokers could be presented as goblins, Aces as buildings, Kings could be portrayed as bearded guys, Queens as cute ladies (congrats Evi, how unusual) and Jacks could be robots. After discussion with the client  we decided to put vehicles on cards with numbers.

CONCLUSION 2 - each color could be designed as a different...how to put it right... subculture?
hearts would be members of the "upper classes" , clubs should be inventors/researchers fascinated with steampunk technical achievements, spades could be pirates or sea travelers and diamonds could be a charming mix of goths and dandies with a touch of decadence.

That's just a little sample of what you can expect to see in the deck. Next posts will reveal more :) 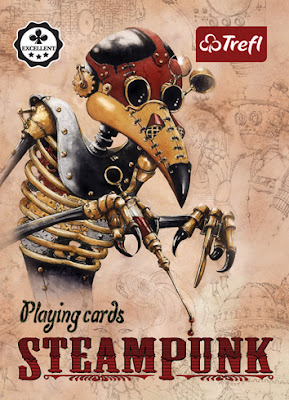